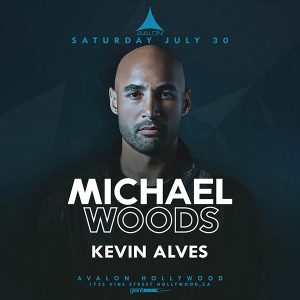 Michael Woods – After first breaking onto the scene, as a then teenager, with 2000’s top 20 UK hit ‘Warrior’, going on to produce Example’s only UK #1 & 1.5 million selling single ‘Changed The Way You Kiss Me’ and holding down his new Las Vegas residency at LiFE at the SLS, Woods is a well and truly established force to be reckoned with. From an early age, Woods has prided himself on standing apart from the crowd. The son of a music teacher, the U.K.-born Woods was classically trained in a variety of instruments ranging from piano to percussion, and as a youth he even performed briefly with the London Symphony Orchestra. The experience this musicality has brought now sets his productions apart and gives him an edge on contemporaries. If that were not enough, Woods launched his own record label, Diffused Music, in 2008. Initially created as a way to have more freedom and control in the creative process, Diffused has rapidly become one of the premiere collectors of talent in the business. With it’s goal to find and nurture new talent, artists could not be in better hands under Michael’s guidance.

Kevin Alves – The last three years have been a whirlwind for DJ/Producer Kevin Alves. As the creative force and visionary behind EDM trailblazers Triad Dragons, Kevin’s career has seen a rapid ascent into the upper echelon of dance music. Starting in the clubs of his adopted hometown of Denver, CO, across North America and all the way to Ibiza, Kevin has DJed some of the top venues in the world. He’s appeared on the main stage at festivals ranging from Das Energy, Global Dance, Decadance, & Foam-wonderland while sharing the stage with world renowned DJ’s Tiesto, Zedd, Eric Prydz, Armin, Above & Beyond, Kaskade, Hardwell among many others. In-between entertaining crowds at each gig, Kevin found time back at his studio remixing for some of today’s top artists like Jes, Nadia Ali, & K-Drew. Remixes, like his take on Ellie Goulding’s I Know You Care, have made Kevin an in-demand producer and remixer for artists looking to capture tomorrow’s sound today. He still found time in this busy schedule to write and produce all of Triad Dragon’s original music, crafting Triad’s unique and infectious tracks that kept dance floors across America banging. Industry heavyweight EDM.com took notice and we’re big supporters of Kevin’s music. Triad Dragon’s amassed over 1 million plays on their soundcloud. Kevin rounded out 2014 with a top 10 Beatport hit on the progressive chart, Chasing Shadows.