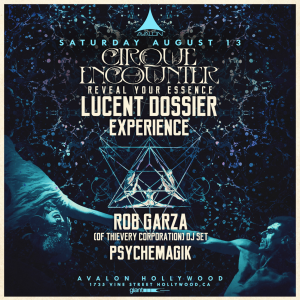 Rob Garza – Founding member of international music group Thievery Corporation, Rob Garza’s career includes decades-worth of accolades as a pioneer of a flourishing electronic music movement. Originally hailing from Washington, DC, Garza’s legacy includes a timeless music catalog that’s still in rotation today. His infusion of electronic music with the international flavors of dub, trip hop, reggae, and bossa nova gave birth to a new era of sound that has attracted a cult following across the decades. Since relocating to San Francisco, Garza’s latest experimentations take him to the far corners of the globe with solo DJ sets showcasing the best of Deep House and Nu-Disco. Ever the entrepreneur, Rob has multiple restaurants and clubs in Playa del Carmen, Mexico as well as Papa Diablo, a hand-crafted, top-shelf Mezcal made in Oaxaca, Mexico. Keep an eye out for his upcoming release this March 2015 of his debut EP “ Palace of Mirrors” releasing on his own label, Magnetic Moon Records. 2015 will be an exciting year to come! Since Garza’s recent relocation to San Francisco, he has begun a re-exploration of his love for electronic music and beats focusing on Nu-Disco, Deep House while keeping very groove oriented and outer-national based rhythms. Recently he has been djing and remixing, taking things to an even more spaced out and trippy level.

Psychemagik – The UK duo, known for their beautiful production work, prolific remixing skills, obscenely vast record collections and transcendent mixtape journeys, are being heralded as a truly unique and positive presence across today’s music scenes. Psychemagik’s first appearance on wax was an edit of Fleetwood Mac’s ‘Everywhere’, which quickly found its way into the record bags of veterans like Tom Middleton and Greg Wilson. The duo have since released an impressive array of highly acclaimed original productions, remixes and edits. They play regularly at major festivals, clubs and special events around the globe. Their studio output is prolific to say the least; original productions such as Valley Of Paradise and the Lunar Escape EP, recent remix projects include Bryan Ferry, Haim, Boy George, Einaudi, Azari & III, Metronomy, Kauf and Mirror People. And then there’s the edits. Their recent version of Fleetwood Mac’s ‘Dreams’, a follow up to ‘Everywhere’, topped the Hype Machine charts and has gained some serious props from around the globe. They have also released a whole host of edits on their Healin’ Feelin and Discotheque Wreckers imprints, all of which made the Juno top sellers list. Their mixes paint the story of two extraordinarily talented and passionate guys. Some blatantly show that Psychemagik can absolutely dominate a dancefloor. Others, like their guest mixes for the Test Pressing podcast, are gorgeously composed psychedelic experiences, which give you an idea of just how deep and amazing their record collections really are. Basically, you can bet that they have the perfect record for any time and any place.