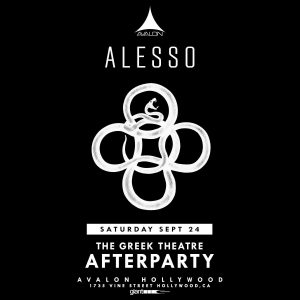 Tickets – Click Here [Use code NOGL for 10% off!] | Guestlist – Not Available

Alesso – With over 3.5million followers online, YouTube views in the millions, and fans including Sebastian Ingrosso, Calvin Harris, Pete Tong, Avicii and Swedish House Mafia, Grammy nominated producer Alesso already has a huge following thanks to his hugely popular remixes and sold-out shows around the globe. His new single, ‘Tear The Roof Up, and forthcoming debut album, are set to be the tipping point that takes Alesso from dancefloor hero to household name. Beginning his career five years ago as a self-taught 18 year-old bedroom producer in Stockholm, Sweden, Alessandro Lindblad’s trajectory to the forefront of the global dancefloor is truly incredible. He began by tinkering with other people’s songs, creating his own edits, adding piano riffs and melody ideas, and uploading his versions to Beatport. Alesso’s efforts reached Swedish House Mafia’s Sebastian Ingrosso, who swiftly took the teen under his wing, becoming his mentor, and signing him to his management and label. Alesso made an impressive entrance with the ‘Taking It Back’ remix of Avicii’s ‘Alcoholic’, but it was his addition of a classic house drop to Nadia Ali’s ‘Pressure’ that helped the single become one of the most played dance tracks of 2011. Swiftly unleashing a barrage of brilliant remixes for Swedish House Mafia, Devolution and LFMAO, the then teenager was named EDM Artist To Watch by MTV.