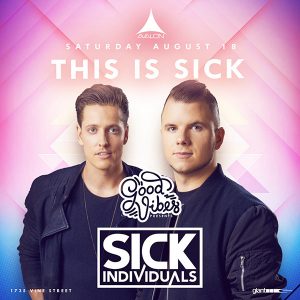 With numerous worldwide hit singles to their name, support from the biggest artists in electronic dance music and pop music and an international tour schedule that has notched up an impressive array of appearances at the world’s most prestigious venues and festivals – Tomorrowland, Ultra Music Festival, Sensation, Mysteryland, Electric Zoo, Ushuaïa and Creamfields to name but a few – SICK INDIVIDUALS continue to set new boundaries with each passing year!
Meeting at the conservatory for music in The Netherlands, Rinze ‘Ray’ Hofstee and Joep ‘Jim’ Smeele formed an instant connection bound by a shared love of music composition and electronic dance music. Drawing influences from Daft Punk, Bingo Players and Swedish House Mafia, their infectious blend of big beats and progressive house melodies quickly garnered them serious attention in all the right places. Coming from the Netherlands, where there genuinely seems to be something in the water when it comes to electronic dance music success, the pair have released on some of the world’s most influential imprints – Revealed Recordings, Spinnin’ Records, Warner, Interscope, Def Jam and Capital. Official remixes for Rihanna & David Guetta, Madonna, Moby, Rita Ora, Avicii and Icona Pop have peppered the global radio airwaves, ensuring their sound reaches millions of ears in all four corners of the planet.
Recognising the power that the internet gave them to give fans constant access to their music, SICK INDIVIDUALS launched their own radio show; ‘THIS IS SICK’. Reaching tens of thousands of listeners every month and eventually morphing into the major new live ‘THIS IS SICK’ concept, created exclusively for their stage performances. The pair manipulate visuals and audio in real time direct from the DJ booth, creating a whole new immersive experience for fans who flock to see them play.
With more new music to come from the pair this year, and a constantly inundated international tour diary, it’s safe to say it looks set to be another truly ‘SICK’ year from one of the Netherland’s most successful musical exports.