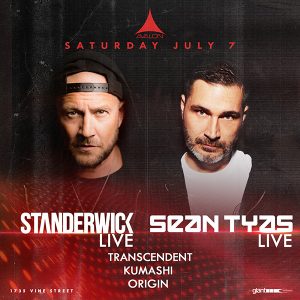 Standerwick may have only started producing music three years ago, but he’s already gained the attention of Trance legends including Armin Van Buuren, Gareth Emery, and Markus Schulz. He’s been featured on A State of Trance numerous times, done remixes for John O’ Callaghan and has played some of the biggest festivals in the world like EDC Vegas and Tomorrowland.

Sean Tyas got started in Trance long before Standerwick all the way back in 2006. However, his time spent outside of the EDM spotlight has allowed him to maintain his classic style of dark trance. Within the scene he is huge having collaborated with Tiesto, Dash Berlin, and Above & Beyond. Most recently he put out an EP on the eponymous Trance label known only as “VII”, and next month he’ll have a fresh remix out on Joyride Music Digital.