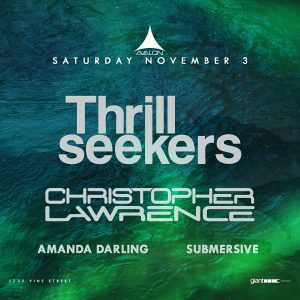 Steve Helstrip, aka The Thrillseekers, has been at the forefront of the global trance scene for some 15 years. From his first single ‘Synaesthesia’, through to countless club classics including ‘The Last Time’, ‘Affinity’, ‘Es Vedra (with Aly & Fila)’ and more recently ‘Just Because’ and ‘Amber’, Steve Helstrip has been behind some of the most emotive electronic music ever released. He’s worked with pioneers like Trevor Horn, shared co-production credits with Chicane and Ferry Corsten, and remixed for artists including Tiesto and Armin van Buuren.

As a DJ, Steve continues to captivate crowds the world over and has recently performed at Aly & Fila’s headline FSOE450 event at the historic site of Karnak Temple in Egypt. Creamfields, Ministry of Sound, Godskitchen and Gatecrasher have all born witness to his fluid mixing, unique style and energetic performances. 2006 saw him climb to no. 45 in DJ Magazine’s top 100 DJs poll.

In late 2005 The Thrillseekers moved into compilation territory with the release of ‘NightMusic Vol. 1′. The CD and 30 date world tour that followed was an instant smash, generating State-side, Russian and Asian releases of the compilation. Summer 2007 saw the heavily anticipated follow-up hit the stores, and repeated again in 2009 with NightMusic Vol. 3.

In 2014 The Thrillseekers notched up 4 consecutive club anthems including ‘This Is All We Have’, which was consistently voted as one of the top trance releases of the year. Armin van Buuren described his track ‘Find You’ as ‘simply brilliant’ and Steve himself as ‘one of his heroes’.

The past six months has seen The Thrillseekers sell out shows around the globe with his open-to-close ‘15 Years of Trance’ events, while his release The Thrillseekers Pres. Hydra ‘Amber’ became the second fastest selling trance release is Beatport history, having reached number 1 in just 3 days. ‘Amber’ is the first single to be released from his upcoming album ‘Escape’, which is due for release on FSOE Recordings in December 2016. With 5 more singles lined-up over the coming 6 months, and many high profile events including Dreamstate, 2017 is going to be his biggest year to date.

Winner of “Best American DJ” at the IDMA’s, Christopher Lawrence is recognized as one of the world’s top DJs and producers. A dance music legend with over two decades behind the decks, he has been described as “One of America’s most influential DJs” by DJ Mag and “A trailblazer” by SPIN. Christopher is recognized worldwide as the driving force behind the trance scene in America whose outspoken support of the underground has earned him the respect of industry and fans alike. Always pushing boundaries, Christopher’s tough tech trance and psy-trance infused sets are a favorite on dance floors at the darkest downtown afterhours to the world’s biggest festivals.

Christopher has racked up numerous awards and accolades over the course of his career taking out both DJ Times “America’s Best DJ” award and IDMA’s “Best American DJ”, plus ranking Top 10 in DJ Mag’s annual poll. He has graced the covers of countless magazines, newspapers and music websites worldwide, and is the only DJ to make the cover of America’s DJ Times magazine twice in one year.

With a club touring schedule circling the globe, Christopher delivers his unique brand of underground mayhem to dance floors from Avalon Hollywood and Ministry of Sound to Home Sydney. He has hosted his own arena at Dance Valley, and played major festivals including Coachella, EDC, Ultra, Dreamstate, Luminosity, Creamfields and many more. Christopher was also the only DJ invited to headline all three of the inaugural Ministry Of Sound, Cream and Gatecrasher tours of America.