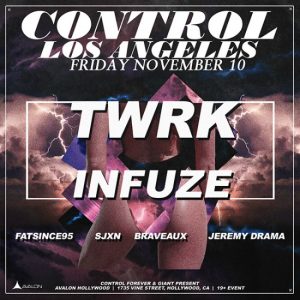 TWRK, an electronic duo made up of New York natives BENZi and eSenTRIK. Both of these highly talented individuals built their careers with a hip hop and rap foundation – and since then – have used this footing to distinguish themselves in the dance music community. Signed to Diplo’s Mad Decent label, the pair first released their debut single “BaDinga” which showcased their bass-filled, hip hop hybridity. More recently, the pair has collaborated with Migos and Sage The Gemini for a smooth track both dance and rap music lovers appreciate.

Known for combining majestic melodies with filthy bass lines, Infuze has released remixes for trap kings RL Grime and Flosstradamus as well as having his original track “Alive” come out on A-trak’s Fool’s Gold Records. Infuze has recently collaborated with Team EZY and FATHERDUDE to release the track “Tell Me Again,” which is currently out on Fool’s Gold.