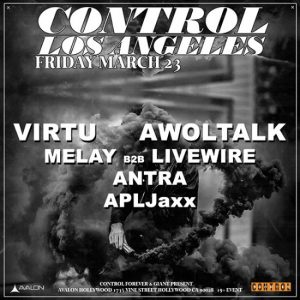 Producer, songwriter and vocalist Virtu has had some stunning highlights in his early on career with his eclectic taste in music making. Local talent being from Santa Clarita, being able to co headline one of the best venues in Los Angeles, you already know this night is going to be special. Gaining notoriety for his remixes of The Chainsmokers, San Holo, Jai Wolf, and even Seven Lions, he’s been making serious waves in the dance scene.

Awoltalk will be co headlining with Virtu as this night gets a bit heavier and more bassy. The Salt Lake City producer has been on a rampage of releases with his last one, a collaboration with Ian Munro that is an incredible slapper. Known for making incredible trap beats and sounds, Awoltalk is going to turn AVALON upside down with his wild set.