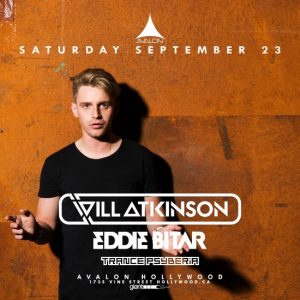 While others are restrained by genre association Will Atkinson runs free, refusing to conform or be pigeon holed. Is he tech, trance, techno, electronica, progressive, experimental…..? He is all of them – and so much more. And it’s this ambidextrous talent that has been the driving force behind Will’s vast appeal and subsequent ever-growing army of passionate fans the world over. The video for his recent single “Pat Butcher” (Beatport number 1 for 3 weeks) generated 1.6 million views in 48 hours – so to say this exciting young uber talent is on fire right now, would be something of an understatement. Will Atkinson is an entity that congers up futuristic soundscapes for the jilted generation. Responsible for over 100 BBC Radio 1 airplays and 6 Beatport number 1s the kid that began mixing records at the age of 7 has certainly come of age. It’s no wonder therefore that with this level of hype that the BBC have now asked Will to join their illustrious Radio 1 line up, as one of their new residents presenting a series of monthly shows that kick off in July of this year. Will’s discography is quite simply a long list of hit records. “Pat Butcher”, “Victims”, “Numb The Pain”, “Subconscious”, “Mesmerize” (ft Rowetta from The Happy Mondays), “The Gamer Changer”, “Fresh Meat”……. all genre defining, chart topping, iconic titles that set the bar uncomfortably high for Will’s peers to try and follow. Having released on all of the scene’s coolest labels including Subculture, Kearnage, FSOE, Spinnin’, Armada, Perfecto Fluoro and Vandit – the demand for Will’s production skills is truly rampant.