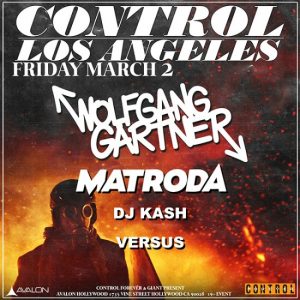 I have to make something that’s never been made before; have to make the best thing that I’ve ever done in my life – otherwise it gets stagnant or worse,” says producer/DJ Wolfgang Gartner. Whether or not his progressively more maximilist take on electro-house is your bag or not, you have to respect his exponentially steep rise through the electro-house ranks. And Lord knows, you’ve heard it — or about it: flipping Beethoven’s 5th for the 4 am crowd; eight #1 tracks on Beatport; remix/collabs with Britney Spears, Timbaland and Black Eyed Peas; festival-highlight performances at Coachella ‘10 and Electric Daisy Carnival’s ‘10 and ‘11. Where Joey Youngman, the one-time party kid from San Luis Obispo, CA and another-time househead old soul, has been electro-house’s dark (work) horse, Weekend in America, his debut full-length for Ultra Music, is Wolfgang Gartner becoming dance music’s one-man parallel universe, outpacing electro-house and outdoing himself.

“One of my mantras is that I have a responsibility to advance the genre. If I’m capable of doing something I’ve never done before, I feel like I have to use that ability, because there are not many people who do – or can. I have to push myself real real hard to do it. That’s something that’s really surfaced with this record,” he admits. Gartner’s work ethic is mythical amongst even his most storied contemporaries: Make music all week. Play it out all weekend. His DJ sets – and this speaks to a combination of prolificness, personal taste and a proven track record – are almost entirely made up of edits of his own work. Then again, when you spend 20 hours a day working on music…”

He attributes this spike in his equal parts obsessive-compulsive/obsessive-creative disorder in part to his recent move from Austin, TX to Los Angeles. “I had one friend in Austin – who I met for breakfast once every six weeks. I woke, up, went to Starbucks, made music, drove to the airport, flew out, and flew home. My studio was in the master bedroom. With my house in California, it’s in a guest room – I decided I want to make the master bedroom for sleeping.”

There are no love songs on Weekend In America, but there is a new love: hip-hop. “Still My Lady” features Omarion, Dipset’s Jim Jones and Cam’ron trade verses on “Circus Freaks,” and Eve brings it on “Get ‘Em” as highlights on the album.

Of course, “naturally” is an evolving word in the Wolfgang Gartner lexicon. As “Menage A Trois” proves, you don’t need a vocalist to hear voices. Another of Gartner’s mantras is that he’s making music for the future, and “Menage A Trois” sounds straight outta 2016: fully articulated synth lines trading verses in their own freaked-frequencies like MCs spitting in some as-yet undecipherable tongue. “The thing that makes that track for me is how conceptually different it is for me,” Gartner offers. “It’s literally just a bunch of random pieces from all over the place and some Fender Rhodes piano and this bass tone and then this vocal snippet that sounds like it’s saying ‘Menage A Trois.’”

But for Wolfgang Gartner, the introverted empath spending thousands of hours in isolation making these tracks that will connect him to tens, even hundreds of thousands of people at a time, Weekend In America is party-rocking speaker-freq’-ing as self-realization. “I can imagine it and I know something amazing that’s never been heard before is possible. Occasionally it’s even something I can already hear in my head and that’s why I have to make this music.