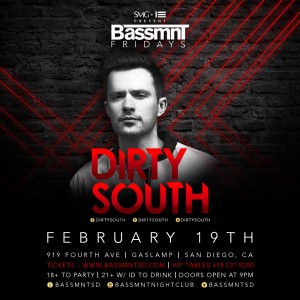 Dirty South – Dirty South, aka Dragan Roganovic, the world renowned DJ, two- time Grammy nominated producer and global festival headliner, is set to challenge every conventional mold of a musical release with his newest album and short-film project, entitled ‘With You.’ A full-sensory experience, ‘With You’ shatters the model of modern-day music with its genre-bending collaborations and resplendent imagery. There are no limits for the Serbian pioneer as he redefines the notion of what it means to be a music producer. See the album. Hear the movie. What began as the writings of a new, alternatively-driven album resulted in more than just a series of perfectly-strewn melodies; a hidden narrative lived between the lines of each individual track, and Dirty South was set to tell it. Enter ‘With You’, the identically named short film project written, directed and produced by Dirty South himself. Yet again challenging any notion of conventionality, the album serves as more than just a soundtrack to the film: it is the very backbone of all that is ‘With You’. Shot using the same revolutionary filming equipment as ‘300’ and ‘Transformers,’ ‘With You’ breathes new life to its dark forests, secluded lakes, and echoing tunnel scenes. Signed to global label Astralwerks in July 2014, Dirty South has collaborated with world-renowned producers, including Axwell who he also shared the studio with in creating their Grammy nominated remix of Temper Trap’s ‘Sweet Disposition’. Dirty South’s productions have earned him several awards including two Grammy nominations, two ARIA (Australia) nominations, a winning vote for ‘’Most Popular Producer Nationally’’ in the 2007 InTheMix 50 DJ Poll, and most recently an ‘’Essential New Tune’’ (Unbreakable, July 2014) award by the legendary Pete Tong. This year will see Dirty South dominate the international festival circuit following an endless roster of performances to date, including headlining gigs at Electric Daisy Carnival, Electric Zoo, Tomorrowland, Creamfields and more. With a credible label behind him and an unparalleled focus to the ‘With You’ project, this year is moving fast for Dirty South, and there is no slowing down.