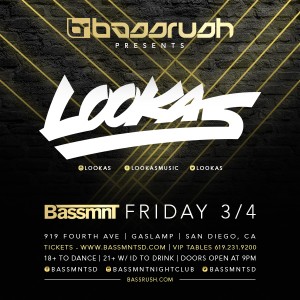 Lookas – Named by Rolling Stone as one of the Top 10 Acts to Watch This Year, LOOKAS is seizing the moment and finding new inspiration everyday. The self-taught Miami upstart first arrived on the scene in late 2013 making major headwaves with his groundbreaking remix of “Tsunami” by DVBBS and Borgeous which was commissioned by Ministry of Sound and released as an official mix in early 2014. With over three million soundcloud plays, the success of the track gained LOOKAS international exposure and major recognition within the dance community. Next followed the noteworthy remix of “War” by Low Rider and the multi platinum-selling single by which he was approached by Flo Rida & Sage the Gemini for “GDFR”. In July 2015, LOOKAS released the original single “Apollo” which has since garnered over two million soundcloud plays.