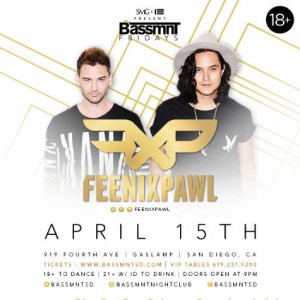 Feenixpawl – A Grammy nod. Numerous world tours. A Las Vegas Residency. Yearly performances at the world’s biggest festivals Digital Dreams, Electric Zoo, Stereosonic, Tomorroworld, VH1 Festival and Feenixpawl has established themselves as respected tastemakers across the electronic music culture. After a break out 2012 with the release of “In My Mind”, a Pete Tong championed Essential New Tune, the duo cemented their place as two of Australia’s most prominent exports. Their timeless hit single, released on Axwell’s iconic Axtone Records shot straight to number 1 on Beatport, held the number 1 spot on the ARIA Club charts for a record 12 weeks and culminated in a Grammy nomination. Following the monumental success of the smash single, the duo was enlisted by Kaskade to remix “Room For Happiness” which led to future requests flying in from major labels Sony & Warner. Their follow up singles “Universe” featuring Quilla and “Destination” again behind the backing of Swedish House Mafia star Axwell & Axtone Records received the same outpouring of support by the likes of Tiesto, Martin Garrix, Alesso, Afrojack, Fedde Le Grand, Dirty South and more that Feenixpawl has been accustomed to.