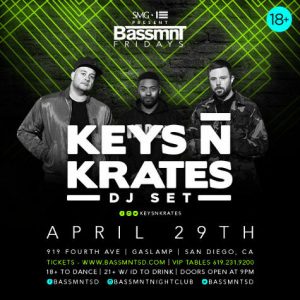 Keys N Krates – While it may look that way on stage, nothing is ever simple with Keys N Krates. Not when everyone has an equally valid opinion, along with the willingness (no, the all-consuming need) to sit and scrutinize a hearty 808 hit or laser like synth line for hours on end. It’s been this way since the very beginning, when Keys N Krates went from being a live hip-hop band reliant on rough acapellas and memory-jogging remixes to something much more complex – a tight-knit trio of producers/performers – Turntablist Jr Flo, Keyboard player David Matisse, drummer Adam Tune – who take rocking a party as seriously as a week spent in the studio. “We always trade roles from song to song,” explains Jr. Flo. “It’s not uncommon for Matisse to flip a sample, or for me to write a melody, or for Tune to chime in on the mixing of a track. It’s not the fastest way of working, but everyone has a say in everything.” Which explains why their breakthrough singles (the elastic loops and diamond-edged drums of “Dum Dee Dum,” the head rush hooks of “Treat Me Right,” a frantic, D’n’B-flavored “Are We Faded”) are able to pull the strings of packed festival crowds without resorting to tired EDM tropes. Hip-hop, house and UK bass music all play a role in a Keys N Krates record, but so do the dark-tinged dynamics and widescreen ways of indie acts like Caribou and M83.