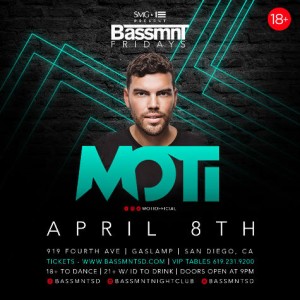 Moti – An enigmatic DJ/producer hailing from Amsterdam, has wasted no time in ascending the peak of the current electronic dance music paradigm. His impressive talents first emerged on the scene in 2012 by releasing “Circuits” and “Kinky Denise,” two high-profile collaborations with fellow Dutch producer Quintino for Afrojacks Wall Recordings. After “Circuits” received accolades from Tiësto, who added the track to his Dance RED Save Lives compilation in 2012, it wasn’t long before MOTI found himself collaborating with the megastar. The joint production effort resulted in a track that would eventually become the 2013 smash Musical Freedom single “Back to the Acid.” “Back to Acid” marked the crown jewel of MOTi’s superlative 2013 campaign, which also featured three chart-climbing singles on Spinnin’ Records and a collaboration with Alvaro on Bingo Players Hysteria Records imprint. MOTi’s chugging Spinnin’ debut “Krack” was followed by the festival-oriented “Heat it Up,” and “Dynamite,” his tremendous third outing with Quintino, which peaked at #10 on the Beatport Top 100. MOTi’s stylistic versatility and savvy for donning divergent genres also found him shape shifting at times to explore new sounds, including trying his hand at booming trap-inspired remix for the Stafford Brothers and Lil’ Wayne on Cash Money. That remix occupied the #1 spot on Beatport’s Hip Hop chart for more than two months in validation of the artist’s freewheeling production approach.