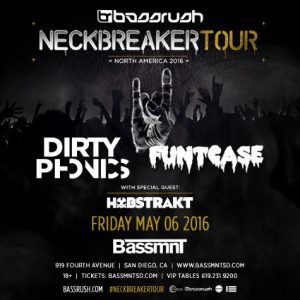 Dirtyphonics – With their incredible production level, a unique live PA recognized as one of the most energetic to be seen, an unstoppable way to innovate in several styles of bass music and a “best newcomers producers” award under their belt, Dirtyphonics is with no doubt one of the most exciting bands in today’s electronic scene. “If you’ve seen these five French originators live, you have witnessed the future of live drum & bass performance that leaves competitors in the dust.” Charly, Thomas, Pho and Pitchin started touring the world in 2006 with their incomparable live act, combining the efficiency of a DJ set to the spirit and energy of a rock concert. In 2008, the band takes a new scope when “French Fuck” gets signed to Shimon’s label (AudioPorn). After its release, the 12” climbs the charts to reach the first place and stays number one for a couple of weeks, bringing them immediatly at the forefront of the scene.

Funtcase – FuntCase (aka James Hazell) has been in the dubstep scene for a hot minute but already making a very solid impact on the scene, with a medley of ranged beats capable to kick the wig off of any head! Since starting his dubstep creations back in July 09, FuntCase has thrown some of the most filthy, and most catchy tunes out there, causing his popularity to rise massively in such a short amount of time. In the 6 years of his production career, previously creating Drum and Bass, he had numerous releases under the name ‘DJ Dose’ but never did he realise the opportunity of the dubstep scene, when he made his first tracks ‘gorilla flex’ and ‘make our day’ as a joke and for mates, who constantly suggested he try and make the style. Now a new addition to the Circus Records crew it seems his hard work has paid off, visiting numerous nights around the UK and the world in such areas as France, Belgium and Romania, with talks of tours further out from the UK being planned.