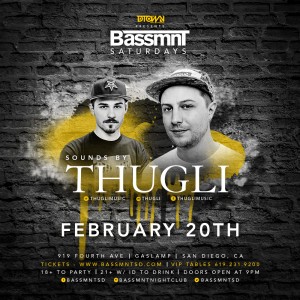 Thugli – Tom Wrecks and Pat Drastik, a production/dj duo based out of Toronto Canada. Pat Drastik, a former national Redbull Thre3style and DMC champion and Tom Wrecks, known for his popular remixes and Juno nominated production, teamed up in the summer of 2012. The duo’s sound is inspired by a long lasting love of dirty south rap combined with a strong passion for electronic music. The outcome in their production is a perfect combination of both these worlds and It shows from the support they are receiving from both ends of the spectrum. From having hip hop producers like Just Blaze & AraabMuzik playing/remixing their work and receiving radio play from New York’s Hot 97 & L.A’s Power 106, to support from Dubstep legends like Zeds Dead & Benga and having regular play on BBC Radio 1, their sound is able to reach a broad audience thus further helping blur the lines between the world of Rap and EDM. The two got their start as THUGLI by releasing several bootlegs & remixes via Soundcloud that quickly caught the attention of Industry heavyweights including  Diplo, A-Trak and Flosstradamus. Since then, they have been on a consistent tear of official remixes for labels such as Fool’s Gold, Dim Mak, Universal, a string of very successful and popular bootlegs and releasing original work such as their debut E.P ‘Onslaught’. From the E.P came the track, ‘Run This’ which was accompanied by a stellar short film/music video directed by Amos Leblanc and Ohji Inoue. The song/video charted in the top 20 for six weeks on the Much Music Countdown and was a Vimeo staff pick on their front page.