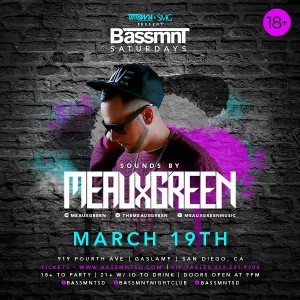 Meaux Green – From sell out shows to viral releases, Meaux Green’s presence in dance music over the past year have turned him into one of the most coveted players in Trap, House, Bass, beyond and he works endlessly to secure a sound unlike anything before. Using his Hip-Hop background as inspiration, and fusing in today’s modern dance sound, the Miami native now finds himself as one the leaders of hip hop and bass music sound. Building a name through multiple residencies and Southeastern shows, he has also become one of the fiercest DJs playing versatile, well rounded sets and quickly becoming a crowd favorite.
His originals however are what pull the plays, the features and the largest widespread support. With nods from industry legends Moby and Boys Noize from the beginning, more recently he’s done official remixes for Flosstradamus, Bingo Players and RiFF RAFF. His Diplo & Friends BBC Radio mix is one of the highest rated of the year and was praised by Diplo himself in the mix saying “This man is responsible for starting all the parties.” His music is consistently supported by greats like Jack U, Bassnectar, Flosstradamus, DJ Snake, Dillon Francis, Bro Safari, Afrojack, Chainsmokers, TJR, Brillz, Lil Jon and even SHAQ. (Yes, Shaq) In fact, Billboard recently named Meaux Green as the “Next Big Sound.”