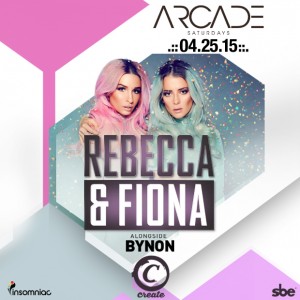 Exclusive Hookup (Free before 11pm Tickets) – Click Here (Hurry before we are out!)

Rebecca & Fiona – At the heart of the music Rebecca Scheja and Fiona Fitzpatrick make as Rebecca & Fiona is their friendship. The pair met through a mutual friend over six years ago in their hometown of Stockholm and immediately connected over life, music and everything in between. Both were grounded in the Swedish DJ scene, promoting club nights around town, and eventually transformed their connection to the genre by creating music of their own. The duo released their first single, “Luminary Ones,” in May of 2010 and scored an opening slot for Robyn on her European Tour. Their sound expanded on buoyant debut album I Love You, Man, which was released in the U.S. in the spring of 2012. Now Rebecca & Fiona’s second album, “Beauty Is Pain”, reveals a continuation in their friendship and an evolution in their music. The pair has been touring extensively since 2011, trekking around the U.S., Asia, Australia and Europe, and performing alongside artists like Tiësto, Kaskade, Axwell and Steve Angello. Their travels have brought them to festivals like Electric Daisy Carnival, Tomorrowland and Beyond Wonderland, but in between all these shows — in hotel rooms and on airplanes — Rebecca and Fiona focused on writing, always interested in capturing new ideas for their next album. “Beauty Is Pain” is the product of two years’ worth of writing, mostly captured in the duo’ studio in Sweden last fall. There was no specific vision going in, just the hope to create a cohesive narrative work that reflected the producers’ continually expanding skill.