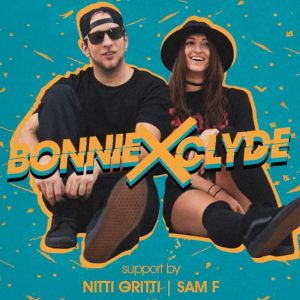 The DJ/Producer/Vocalist duo, debuted “The Ride” in July 2015, their first track in a series of hits that exposed the world to their unique style coined “Vocal Bass”. BONNIE X CLYDE followed up with their viral hit “Rise Above” which grossed over 700k plays on Soundcloud, 600K plays on Spotify, 900k hits on TrapNation’s YouTube, and landed them a licensing deal with Insomniac Records. The duo later released “Why Do I,” “Where It Hurts,” “Worth It,” and “Closer,” bringing their total play count well over 6 Million.

Fresh off of a direct support set for Skrillex, BXC made their festival debut at Life in Color Miami, and then immediately embarked on their 10 stop headlining “Gunshine State Tour”. In Fall/Winter 2016, BXC hit the road again to continue their domination of the club and festival circuit nationwide. The duo performed at various festivals such as: Nocturnal Wonderland, Life Is Beautiful, EDC Orlando, LIC Fresno, and hit multiple club markets coast to coast. BXC finished off the year with a performance at Insomniac’s highly-anticipated NYE Festival, Countdown, on December 31st. Continuing their momentum in 2017, BXC will be performing mainstage at Life In Color Festival, CRUSH and Middlelands, in addition to their streak of club performances across the country.