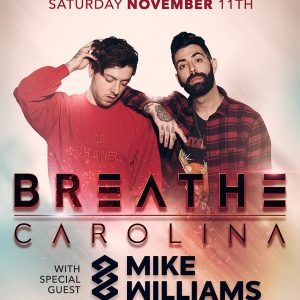 The multi-faceted, Colorado-based EDM/post-hardcore/electro-pop unit Breathe Carolina was founded in 2006 by Kyle Even and David Schmitt. The Denver group’s blend of synth-based beats and melodic screaming first appeared on the public radar in 2007 with the self-released Gossip EP. It was followed in 2008 by the band’s first full-length for Rise Records, It’s Classy, Not Classic, which featured all of the tracks that appeared on Gossip with six additional new songs. Hello Fascination was released in 2009 and peaked at number 43 on the Billboard 200, and in 2011, the group released their third full-length, Hell Is What You Make It. Though founding member Kyle Even left the group in 2013 to focus on being a parent, Breathe Carolina would continue without him, eventually releasing a fourth album, Savages, in 2014, which featured the singles “Collide,” “Bang It Out,” “Sellouts,” and “Savages.” The following year saw the release of a new single, “More Than Ever,” a collaboration with Ryos featuring vocalist KARRA. It was issued via Dutch indie Spinnin’ Records. Over the next year, Breathe Carolina had a prolific streak, releasing a bevy of high-profile singles and a pair of EPs in 2016’s Sleepless and Oh So Hard. They collaborated with artists like Blasterjaxx, APEK, Haliene, and many more. Another EP called Coma, again for the Spinnin’ label, arrived in 2017.

Literally from A to Z; that is the amount of control Mike Williams has over his career. From the first note that he has ever written to the smallest detail in his live shows; the commitment toward everything that his fans get to experience is seemingly endless. As one of the very few artists to break through with a signature sound it has been the distinctive ‘bounce’ that Mike Williams’ has perfected since. And while this was the start of a whirlwind adventure within the global electronic music scene Mike’s true trademarks have always been a sense of serenity and his ever-present modesty.