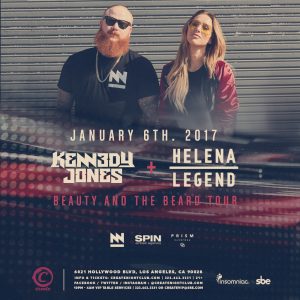 Kennedy Jones – From festival stages to sold out nightclubs, Kennedy Jones quickly made his mark on the dance music movement. Incorporating elements from all of his favorite styles of music, coupled with his exceptional lyrical ability, the Never Not CEO managed to become not only one of the most versatile producers in electronicmusic, but one of the most entertaining live performers as well. With overwhelming support from some of the biggest names in the game, from Skrillex, Diplo, Major Lazer, and Borgore, to Carnage, 12th Planet, Ookay, Brillz, Bro Safari, Mt Eden, Just Blaze, and more, Kennedy Jones is continuing to show the world that his high-energy, bass-fueled, twerk-enducing production, is changing the performance landscape for good.