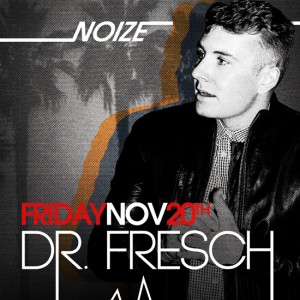 Dr. Fresch – Since 2009 Tony Fresch has made a name for himself as one of the most distinguished up and coming DJs and producers in the LA edm scene. He has played at some of the most well known clubs in California including The Avalon, Club Nokia, The Key Club and Dim Mak Studios. He has opened for the likes of Steve Aoki, Diplo, Rusko, and Dillon Francis, among others. In 2011 his remix of Chromeo’s “Hot Mess” under the alias Rolex was chosen as a winner in Turbo Recordings’ official remix contest and was released on Turbo Recordings’ Hot Mess Remix EP. In 2011 and 2012 Tony won the title of “Best College DJ in LA” in a live contest vote. Tony has recently developed the deeper alias “Dr. Fresch” and has released two acclaimed remixes for indie rock bands Y LUV and Kiven. The debut Dr. Fresch EP, “Fantasy / Ecstasy,” was released on Prep School Recordings in June.