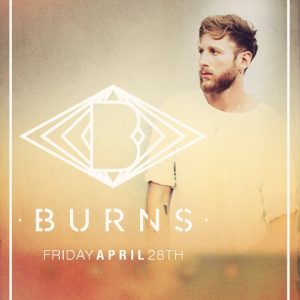 Burns – If you want to understand modern pop’s protean nature, you don’t have to look much further than Matthew James Burns, better known just as BURNS. Pop in 2016 is amorphous, ever-changing, and exceptionally difficult to pin down to one genre, and so is he. BURNS is a songwriter, DJ, producer–not to mention a gifted guitarist, keyboardist, and drummer–who moves easily between pop, dance music, and hip-hop. Lately he’s been staking out space in the increasingly important and popular place where the borders between those genres have started to disintegrate. That space has gotten a little wider since the release of Britney Spears’s G-Eazy-featuring “Make Me.” Propelled by BURNS’s sensuous slow-motion beat (which he played guitar and keys on), a hook (which he co-wrote) that instantly embeds itself in the listener’s brain, and one of Spears’s all-time most evocative vocal performances, the track reached the top of the iTunes charts within just hours of its surprise release.