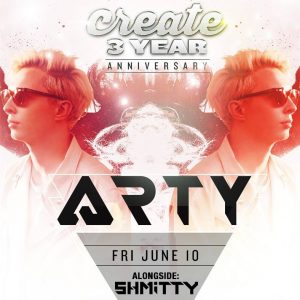 Arty – Finding that perfect sweet spot between house and trance, Arty’s formidable sound is one of dance music’s most recognizable and sought-after. Born in Russia and growing up amidst its transition from the Soviet Union, Arty studied at music school until the age of 14, gaining invaluable training and knowledge – ultimately realizing that the traditional route was not for him. A love of video games and electronics led onto a curiosity for production equipment, and before long he was experimenting with sequencers while cutting his teeth on the sounds of The Prodigy, The Chemical Brothers and The Crystal Method. He began sending demos to labels in 2009, and landed his first release on the UK’s Enhanced Progressive that same year. The quality of his productions belied his inexperience, and his prodigious talent rapidly became in high demand throughout the industry. Above & Beyond snapped up ‘Rush’ in 2010 for his first release on their acclaimed Anjunabeats label, with Axwell’s Axtone releasing ‘Trio’ alongside Matisse & Sadko in 2011. In just two years, he had landed releases on his two favourite labels, setting the tone for his impressive rise through the scene.