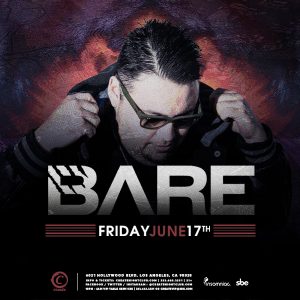 Bare – Turns out you can teach an old BARE, new tricks!! Sean Rodela also known as ‘BARE’, hails from East LA, a 4th generation Mexican American, who was raised in LA’s’ historic rave scene. BARE was lucky enough to have made it from the wrong side of the tracks, by expressing himself via bands and hip-hop groups until he found his one love, Electronic Music. Over a decade ago 12th Planet and he began to experiment in DNB, loosing their producing virginities together. Sean originally found his sound in the early days of dub-step as a poster child for the Sub-human label and for co-producing ‘King Kong’ with Datsik.As dub-step declined, a more mature BARE began experimenting in different sounds. He regained a flood of happy memories as he explored his creativity into the different genres. BARE came to the realization that he just wanted to make people dance. Over the past year, rebuilding, rebranding and rapidly growing as an artist and as a person. Sean is now becoming one of the most sought after producer/ DJs in the business. He has amassed an incredibly long discography now being filled with 128 BPM.