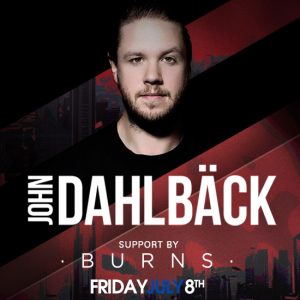 John Dahlback – John Dahlbäck is further testament to the theory that when it comes to overly talented musical homelands, there could indeed be something in Sweden’s water. Born in 1985 in a small village near Stockholm, he landed his first record deal aged just 15 while most of his peers were just discovering clubs. Just a few years later he was already the proud owner of a worldwide respected label, had a string of well-known productions to his name and a reputation for quietly turning out some of the best house melodies you could hope to hear.With a family background boasting more music than the Von Trapps it’s no surprise he was instantly hooked – his mum sings in a jazz band, his dad drummed in a prog rock band, and various aunts and uncles played piano, guitar and more, so he was hardly stuck for inspiration or opinions to help him get started. Learning the basics on his dad’s Atari computer he soon established his own style, and his second demo, a jazz-influenced, deep house number called Night Flash, earned him a record deal with Route 33.