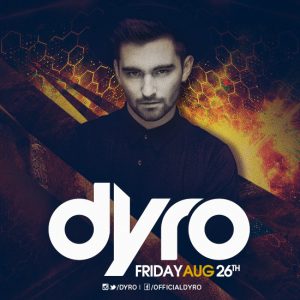 Dyro – Dyro’s journey to the upper ranks of the electronic music scenes marks him out amongst his peers as one of the most talented artists to have emerged from the new generation of Dutch house artists currently taking over the industry. Recently crowned #27 in the DJ Mag Top 100 Poll 2014, the last twelve months has seen this enigmatic young DJ come of age as he continues to take the world by storm!Known for driving bass lines, enchanting melodies and highly charged drops, he has seamlessly made the transition from bedroom musician to renowned international DJ/Producer. Dyro has surpassed all expectations, previously tipped by the likes of World #1 DJ Hardwell, Laidback Luke, and Dada Life as their ‘Breakthrough Artist of 2012′ and claiming the highest new entry slot in the 2013 Top 100 poll at #30. His career has been on a constant upward trajectory since dropping his seminal first releases “Daftastic’ dropped on Hardwell’s Revealed recording’s in 2011.Looking back over the past 12 months, Dyro’s tour schedule is a dot-to-dot of some of the world’s biggest and best festivals and clubs. From headline appearances at clubs such as LIV in Miami, Ministry of Sound in London to his residency at The Light in Las Vegas and Space in Ibiza, he has also earned mainstage slots at star-studded festivals that include Dance Valley, New York’s Electric Zoo, TomorrowWorld, Spring Awakening Music Festival in Chicago, Wish Outdoor in the Netherlands, Digital Dreams in Toronto, Creamfields in the UK and EDC Las Vegas for a infamous three-way back to back session with Hardwell and Dannic.