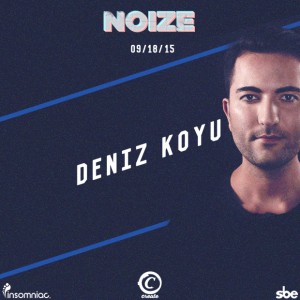 Deniz Koyu – Since he first laid hands on piano keys at the tender age of five, Deniz Koyu has been a man obsessed with making music. A producer’s producer – who counts Fedde Le Grand, Sebastian Ingrosso, Axwell, Tiësto, Avicii, Alesso, Erick Morillo, David Guetta and Calvin Harris among his biggest fans – the man behind hits ‘Tung’, ‘Hertz’, ‘Bong’, ‘Follow You’, and more spent his formative year immersed in the world of DJ and production hardware. Hard-earned pocket money was readily swapped for all the second-hand synths and drum machines he could find; hours were spent dissecting the works of Depeche Mode, Daft Punk, Kraftwerk or Cassius; days were spent honing his DJ skills, editing his favourite tracks using nothing more than small tape recorders, sampling whatever he could lay his hands on. In 2011, when Koyu burst onto the global music consciousness with ‘Tung’ and ‘Hertz’, the obsession became a well-earned profession.