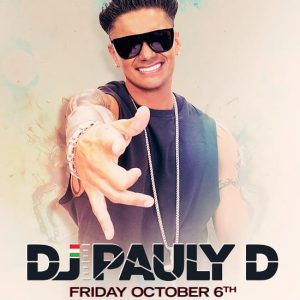 Born in Providence, R.I., Paul “DJ Pauly D” DelVecchio is recognized for his musical talent as well as his reality star status on MTV’s highest rated show, “Jersey Shore,” which premiered in December 2009. Quickly a fan favorite, MTV announced Pauly as the first cast member to receive his own spinoff, “The Pauly D Project,” chronicling his life as a celebrity DJ, which premiered on the network on March 29, 2012. In summer 2013 Pauly spun across North America on the“In A World Like This” tour with Backstreet Boys and Jesse McCartney.

On January 15, 2013 Pauly released his first single, “Back To Love” featuring Jay Sean, on 50 Cent’s record label, G-Note Records. “Back To Love” soared to number four on the iTunes Dance Chart in less than 24 hours. Pauly also developed a full line of headphones with 50 Cent and SMS Audio and joined 50 Cent’s SK mission in helping fight world famine. Most recently, Pauly has been featured on “Extra” as their special correspondent interviewing celebrities such Britney Spears, Pitbull and Giada De Laurentiis in Las Vegas, where he currently resides.