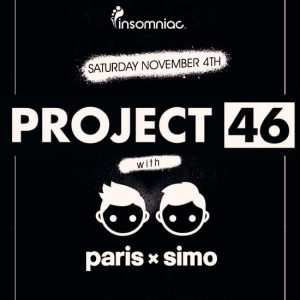 Project 46 made an undeniable impact on the progressive house scene this year, on a meteoric rise that started when their breakthrough Monstercat release Reasons featuring vocals by Andrew Allen went straight past Tiesto to the #1 overall spot on Beatport. Living at opposite ends of the country has not slowed down the steady flow of productions from the Project 46 studios, as Ryan and Thomas find time to post new tracks on their Soundcloud page at least weekly. Their refreshing mixes of originals, remixes, bootlegs, and mashups have kept fans engaged and drawn massive support from followers across the globe. Fast forward a few months, and releases on SPINNIN and Manufactured Music combined with their solid studio output and touring schedule earned Project 46 a well deserved placement on the Top 100 DJs list, squeezing in at #100, joining Richie Hawtin and Deadmau5 as the only Canadians to make this year’s poll.

Electronic Dance Music has continued to grow at a rapid pace throughout the world, but even more so in the United States. With that being said, the Pioneers, while still playing a major role, are beginning to pass the torch to some fresh new faces.Among the up and coming talents are Paris & Simo; a 22-year old duo from Montreal, Canada, who in a short amount of time have managed to impress dance music enthusiasts as well as some of the greats.Joining forces in 2010 and only 22-years old they have played alongside some of the industries biggest names such as Deadmau5, Sebastian Ingrosso, Sander Van Doorn and many others. While this may seem to be the end all be all, it surely is not, as it is their music that catches the eye of artists such as Hardwell, who quickly signed Paris & Simo’s track early productions “Monk” and “Nova”.With high energy and a stage presence comparable to that of a seasoned vet, they have rocked the stage at Resolution Quebec in 2011 and set the scene for a roaring crowd of 6,000 people, but one of their biggest moments was when they won the first ever Discovery Project in 2012, and were given the opportunity to play at EDC amongst thousands of screaming fans.In 2013, Paris & Simo have pumped out three monster singles (Escape, Tundra, and Chaa) that sat in the Top 100 on Beatport at the same time! Not to mention their single TUNDRA has been receiving massive support from artists such as Fedde Le Grand, Avicii, Tiesto & Hardwell who have played this heavy hitter during their sets. This is only the beginning, as they set out to conquer the EDM scene one show at a time leaving festival goers and nightclub junkies enthralled by their crisp production skills and lively performances. If you have not had the chance to see them, you are in luck! Paris & Simo have a long list of upcoming US dates in cities such as Las Vegas, New York, and Miami to name a few!