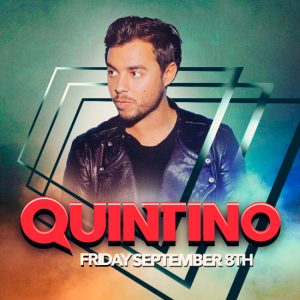 Known as a highly talented Dutch DJ and producer, Quintino has become one of the leading forces in the global music scene today. After taking on the role as DJ it wouldn’t take long before he was able to place his mark on nowadays dance music. Working with legendary names as Tiësto and Hardwell, signed to the world’s largest dance label Spinnin’ Records, this is a DJ whose career gets boosted year by year.

At a young age, Quintino is discovered by house music mastermind Laidback Luke, who’s impressed with Quintino’s precision and unrivaled ability behind the turntables. After conquering the Dutch club scene, the young DJ starts making new steps, releasing among others the with platinum certified track ‘Epic’ with Sandro Silva in 2011, which in total has been streamed more than 34 million times combined. Another banger from the hands of the talented DJ is ‘Go Hard’, released in 2014, reaching 32 million YouTube views and 2.3 million Spotify plays.