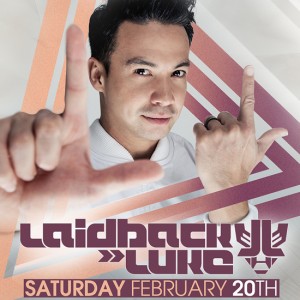 Laidback Luke – If it’s music’s prerogative to change with the times, Laidback Luke is the master of evolution. The one time Chocolate Puma protégé turned Dance Music heavyweight has a two-decade track record of doing things his own way, keeping versatility at the core of his every move. He’s inspired the masses, rewired a worldwide passion for dance music and set a new precedent for fan interaction along the way. Add a who’s who list of collaborators, remixes, global live credentials and a side line in professional Kung Fu and there is still no rarer breed of superstar DJ than Laidback Luke. Since minting his debut release in 1995, Luke’s authority has only strengthened with the changing tides of dance music. Boasting collaborators to-date as varied as Diplo, Example, Lil Jon, Hardwell and Swedish House Mafia, his music shows a rare balance of both chart and credible club success. The wealth of remixes and personal bootlegs under his belt begs no exception, with credits ranging from Daft Punk, Green Velvet and Depeche Mode to Robin Thicke, Madonna and Mariah Carey. Adding house sideline Nouveau Yorican alongside wife and fellow DJ Gina Turner to the equation, his agenda continues to push boundaries and break norms at every given opportunity.