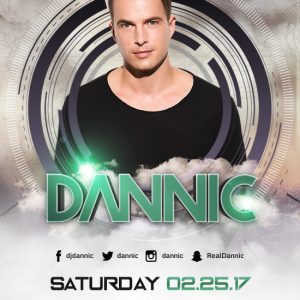 Dannic – Dannic, the prodigious DJ and producer from Breda in the Netherlands – the hometown of Tiësto and Hardwell – is one of the fiercest acts to emerge from the latest generation of Dutch artists, cementing himself as a go-to name that delivers within the world of big-room, grooving house. Bursting onto the scene with a DJ Mag Top 100 DJs Poll placing 4 years in a row as of 2016, it’s confirmed to tastemakers that Dannic is a driving force within the scene. Dannic’s long-running stance behind the radio airwaves including his recently-launched Fonk Radio venture, also demonstrates a producer that is well and truly tapped into the most vital and important industry trends that appeal to his ever-expanding audience.From his debut releases on world-class labels including Toolroom and a longstanding relationship with Hardwell’s Revealed Recordings, Dannic’s constant output of dance floor-ready bangers and groove-laden productions continues to excite across live shows as well as productions. A regular feature at Revealed’s global events and tours that have seen the Dannic sound grace the stages of Creamfields, Tomorrowland, Miami Music Week, plus many more, the launch of his own aforementioned, independent imprint – Fonk Recordings – has reflected Dannic’s musical flair from every angle. From sourcing Demos, A&R’ing, design and production, the first release through Fonk Recordings (A collaboration between Dannic himself and HIIO titled ‘Funky Time’) was supported by industry stars Axwell ? Ingrosso, Fedde Le Grand and W&W. The ‘Fonk Summer EP’ also taking the #1 spot on the Beatport Progressive House Chart, as well as a swathe of Top 10 releases with the label still only in its early stages, Fonk Recordings recently hosted a sold-out label showcase party of label family and friends during the Amsterdam Dance Event in October.