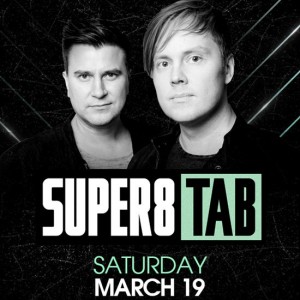 Super 8 & Tab – Since their collaboration in 2005 Super8 & Tab have released two Beatport trance number one artist albums, played at major music festivals all over the world, including EDC, Ultra, Tomorrowland and A State of Trance, been nominated ‘Best Breakthrough DJ’ at the Miami WMC IDMA Awards and they consistently score highly in DJ Magazine’s Top 100 poll. And having now signed to colossal record company Armada Music, they show no signs of slowing down. Things really started happening for the Finnish duo in 2004, when Above & Beyond adopted each of them individually as the first members of the ever-growing Anjunabeats family. But like most DJs, Super8 & Tab were interested in music from an early age. “I saw a photograph of myself when I was two-years-old holding a guitar, so it must have begun then,” jokes Janne Mansnerus, AKA DJ Tab. “And I wrote my first track when I was four – although it wasn’t my best work,” adds Miika Eloranta, better known as Super8. They both discovered electronic music at the age of 15 – Tab at a club night for teenagers in Helsinki and Super8 on a family holiday to Spain: “My Dad took me to Pacha,” he says. “It was the first time I’d ever seen DJs beat mixing and I was sold. I got my first real synthesisers and it started from there.” And from there, he met Tab at a recording studio in 2005. Once they realised they were both releasing tracks on Anjunabeats, they took the logical step to start working together. But although the duo have grown with Anjuna and have had multiple number one releases on the label, they’ve always put out records on other imprints too; the latest of which is Armada Music.