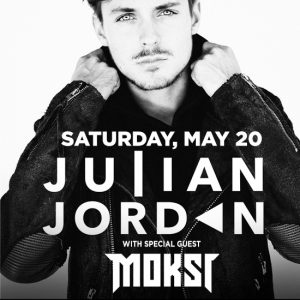 Julian Jordan – Dutch DJ/producer Julian Jordan is at the vanguard of the country’s new generation of dance music hotshots, with a mightily impressive track record in his short time in the game. He brings a fresh spin to the dance scene, fusing some of its trademark sound and bombast with exciting new twists and influences that so far has seen the likes of MTV cite him as “one to watch”. “I have to say, I really like people that just do their own thing and don’t follow the hype.” he explains of his musical ethos. “I like to think outside of the box, and what inspires me are other artists who do that as well.” A slew of releases have proved that he is fully able to put his money where his mouth is, while DJ sets everywhere from Electric Daisy Carnival to Tomorrowland have made it clear that he is adept at translating this ethos for the dancefloor. “I know labels are looking for fresh tracks that could be the new hype. So, don’t follow the hype; create it!”