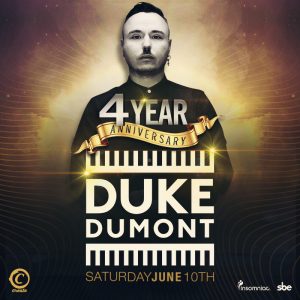 Duke Dumont – Adam George Dyment, a.k.a. Duke Dumont is a British DJ and music producer, known worldwide for his single “Need U (100%)” which topped the UK Singles Chart in April of 2013. Duke Dumont is a master composer of house techno, and an underground hero in the British club scene. His “Need U (100%)” was nominated for Best Dance Recording at the Grammy Awards, but lost out to Anton Zaslavski, better known by his stage name, Zedd. His tracks regularly hit the top spots on the British music charts.