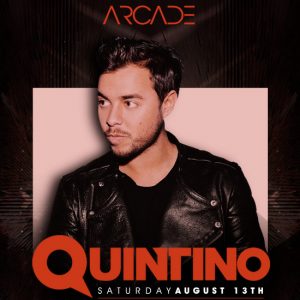 Quintino – Known as a highly talented Dutch DJ and producer, Quintino is quickly becoming one of the leading forces in the global music scene today. After taking on the role as DJ it wouldn’t take long before he was able to place his mark on nowadays dance music. Working with legendary names as Tiësto and Afrojack, signed to the world’s largest dance label Spinnin’ Records, this is a DJ whose career gets boosted year by year.At a young age, Quintino is discovered by house music mastermind Laidback Luke, who’s impressed with Quintino’s precision and unrivaled ability behind the turntables. After conquering the Dutch club scene, the young DJ starts making new steps, first by remixing trap hit ‘Rap Das Armas’, his first #1 record in The Netherlands, followed by the release of instant electro classic ‘Epic’, made with Sandro Silva, in 2011 that catapults to platinum, almost touching the 17 million views on YouTube. That same year Quintino also works closely with his friend Afrojack to produce hit tracks like ‘Selecta’.Meanwhile, he launches his global radio show SupersoniQ Radio on worldwide station SiriusXM’s Electric Area. By now, the show has proven to be a smash hit and is delivered to the masses through over 30 global radio stations as well as all the major socials and streaming sites.The Dutchman is now part of a new generation in worldwide electronic dance music, and signs a deal with influential label Spinnin’ Records. He starts working with DJs like Tiësto and Alvaro, in particular to release the iconic Ultra Music Festival anthem.