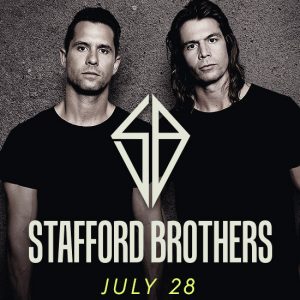 Stafford Brothers – Stafford Brothers are the hottest Australian DJ and production team to hit the US electronic party scene in recent years. Since relocating to Los Angeles from the land down under, brothers Matt and Chris Stafford have collaborated with titans of industry,sold millions of records, and now host headline club nights in the party capitals of the world. In their home country, they were voted the number one DJ’s (ITM Awards) three times in consecutive succession, and in the same year ranked in the DJ Mag Top 100.

They were the first DJ’s to have their own reality TV show ‘The Stafford Brothers’ broadcast on a major network (FOX), and theirweekly radio shows have reached millions on the 2DayFM and iHeartRadio networks, amongst others. As producers, their original music and remixes are found on the biggest heavyweight labels in the world.