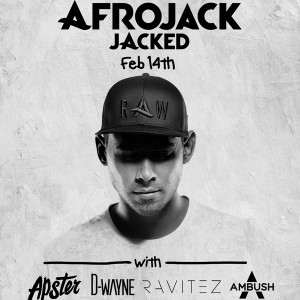 Afrojack – Grammy award winning DJ and producer, Afrojack, is one of most notable and iconic names in electronic dance music (EDM) today. At only 26 years old he has made a large impact on the music industry and is a key player in the worldwide explosion and popularity of EDM. In 2013, Forbes magazine crowned him as #7 on ‘The World’s Highest Paid DJs List’ and this year The Hollywood Reporter called him ‘’a global icon’’ set ‘’to conquer the world.’’ A talented producer and artist Afrojack is versatile and creative with his sound whether creating club hits or producing and remixing for the likes of Beyoncé, Pitbull or Madonna. Afrojack is adept at shifting between genres and playing with his sound and it’s easy to see why his skills are some of the most sought after in the world. Starting off in his hometown of Spijkenisse, Nick van de Wall aka Afrojack, quickly made a name for himself with a slew of hard­-hitting underground releases, before exploding on the music scene in 2011 with the release of ‘Take Over Control’ -­ an instant worldwide club and chart hit the single reached platinum status in the U.S. Afrojack then went onto develop his own imprint in the production world with his label ‘Wall Recordings’ – a platform by which other passionate EDM artists could grow. He also wanted his label to retain the ‘club music’ brand, something he strives for with every Afrojack release. 2011 also saw Afrojack sign a landmark deal to become one of the first ever DJ’s to sign an annual residency in Las Vegas, at the legendary Wynn Hotel. The residency saw Afrojack perform over a dozen times a year at Wynn clubs including Encore Beach Club, Surrender, Tryst and XS.