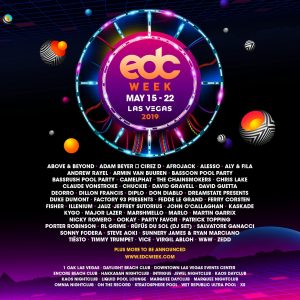 EDC Las Vegas is Insomniac’s biggest party of the year, but the days leading up to it—as well as those following—have become calendar-worthy events unto themselves. Officially dubbed “EDC Week” by Las Vegas Mayor Carolyn Goodman in 2013, it’s seven days of curated entertainment and special events, beginning the Wednesday before EDC and ending on Wednesday, May 22. World-class artists descend upon the city in honor of North America’s largest dance music event, treating fans to special sets at unprecedented indoor and outdoor venues.

“EDC Week has always sparked the energy that builds just before EDC Las Vegas, and it’s the party that continues even after the festival ends,” says Pasquale Rotella, Founder and CEO of Insomniac. “We changed the dates to run from Wednesday to Wednesday so fans can arrive later in the week and stay later for a stacked lineup of events on the Strip and beyond.”