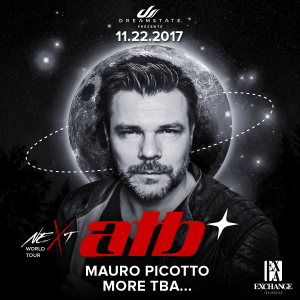 ATB is the alias of progressive house/trance DJ and producer André Tanneberger, a native of Freiberg, Germany, born in 1973. ATB’s catchy, vocal-driven singles crossed over from clubs to mainstream pop radio, making him one of the most recognizable artists of trance’s late-’90s/early-2000s commercial peak. He is best known for his first single, “9 PM (Till I Come),” a euphoric yet chilled-out progressive house instrumental featuring a smooth, distinctive guitar riff. This guitar sound became ATB’s trademark, but his lengthy discography has incorporated elements of ambient, drum’n’bass, and rock. His popularity has continued, earning him rankings in numerous international DJ polls, and he has a particularly strong following in Poland, where several of his studio albums and mix CDs have gone gold or platinum. Tanneberger started his career in the early ’90s, forming Euro-house group Sequential One in 1993. The group was moderately successful in Europe, releasing three albums and over a dozen singles until their dissolution in 1999. In the wake of remixes for acts including the Outhere Brothers, Technotronic, and Haddaway, Tanneberger began using the name ATB for his original solo material. He scored a major hit with 1998’s “9 PM (Till I Come),” which hit number one in the U.K. and went gold or platinum in a few other countries. Similar-sounding 1999 follow-up “Don’t Stop” nearly duplicated the success, and full-length debut Movin’ Melodies arrived later that same year. The album also featured the single “Killer,” a remake of the Seal and Adamski hit, with Drew Williams on vocals. The song was another smash hit, and began ATB’s successful run of vocal trance anthems.

As the first Italian DJ to tour the world, he’s put his homeland on the global techno map. As the first DJ to mix live on the eminent BBC music show Top Of The Pops, he’s helped bring techno to the widest audience possible. As the man behind Meganite – one of Ibiza’s most successful and longest running nights – he has recruited some of the world’s most respected underground DJs as residents; Adam Beyer, Marco Carola and Chris Liebing. This journey to legendary status began over 25 years, 700 releases and 7 million unit sales ago when he became the first Italian finalist in the world DMC championships in 1988. Galvanising this success the following year with a win on a live broadcast Italian DJ competition called The Walky Cup, his national crown as a premiership DJ was realised… And the world beckoned. A string of sonic successes, dancefloor dominance and industry victories followed; early chart appearances as R.A.F and co- writing for myriad European house acts during the early 90s led him to become a partner Media Records, while his reptilian trilogy in 1998 elevated him to a global level; ‘Lizard’, ‘Iguana’ and ‘Komodo (Save A Soul)’ fused trance with techno on such a level they became hymns for the biblical superclub explosion during the last few years of the 20th century and charted in many countries. From this point onwards, the world could no longer ignore the dance music and techno phenomenon. And Mauro was driving from the front. As one of the most in-demand artists across the globe, he barely left DJ Mag’s illustrious Top 100 DJ list throughout the first decade of the 21st century. Constantly searching for innovative developments – both musically and technically – Mauro expressed an early vision that is now common place within electronic music: his ability to bring the underground to the masses, to fuse melody, hooks and harmony with industrial strength drum dynamics, his innate understanding of widescreen DJ selections that cover the whole spectrum created a reputation that positioned him in all corners of techno.