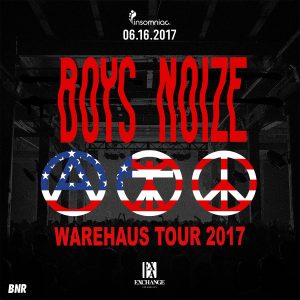 Boys Noize – He’s the techno punk, the unboxable nomad: Berlin DJ, producer and label owner Alex Ridha, better known as BOYS NOIZE, made his DJ debut at the age of 15, taking a teenager´s love of house and techno to a global scale. Accolades have been bestowed by Rolling Stone, who named him one of the “Top 10 DJ’s Who Rule The World” and Beatport, who elected him “Best Electronic Act” 3 years in a row. He´s rocked the world’s biggest stages, lit up Coachella three times, took Lollapalooza by storm, and headlined festivals and clubs on every continent – from Berlin techno temple Berghain to Fuji Rock in Japan to Justin Vernon’s Eaux Claires Festival in the woods of Wisconsin.