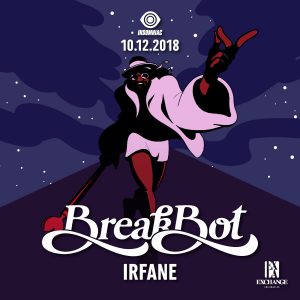 The project of French producer Thibaut Berland and vocalist Irfane, Breakbot combines funk, disco, house, French touch, and more into an ultra-stylish blend. Berland first made a name for himself in 2006 with a remix of Justice’s “Let There Be Light” that was included on the Waters of Nazareth EP released in Japan. The following year, Berland issued the Happy Rabbit EP, his debut release as Breakbot, on the Klee label. He also established himself as an in-demand remixer, working on tracks by Digitalism, Sébastien Tellier, Röyksopp, and many others. Breakbot made his Ed Banger debut in 2010 with Baby I’m Yours, which featured vocals by Irfane and remixes by Siriusmo and La Funk Mob. 2011’s Fantasy and the following year’s One Out of Two — both of which featured guest vocals by Ruckazoid — paved the way for Breakbot’s 2012 debut album, By Your Side. The album arrived in the States in April 2013. Breakbot spent the next few years touring and remixing tracks by Birdy Nam Nam, Phoenix, and Busy P while working on new music on the road. Berland and Irfane — now a full-fledged member of Breakbot — entered the studio of Berland’s brother David in 2015. Taking inspiration from Curtis Mayfield, Michael Jackson, and Prince, the act’s first new music in three years arrived with the “Get Lost” single. The full-length Still Waters was released in early 2016.