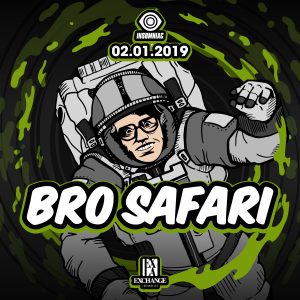 Austin, Texas-based DJ/producer Nicholas Weiller, aka Bro Safari, is an electronic musician known for his moombahton, trap, and dubstep-influenced sound. Born in Rome, Italy in 1978 to American parents, Weiller grew up in Atlanta, Georgia, where he developed an interest in music in his teens. Initially into punk, he started out playing guitar, bass, and drums. However, during college he became fascinated with dance music and began creating his own drum’n’bass-style productions, eventually joining the electronic trio Evol Intent. As a solo artist, Bro Safari debuted with the Drop EP in 2013, followed a year later by the full-length Animal with UFO! The Bender EP appeared in 2015. In 2017 he collaborated with Dillon Francis on the Collisions EP, featuring the single “Reality.”