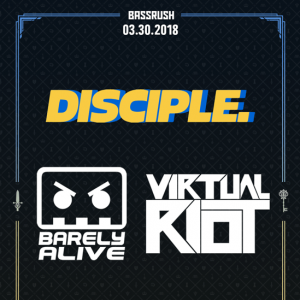 With countless Beatport number 1’s, tens of millions of hits on Soundcloud & Youtube, collaborations with Datsik, Getter, Dodge & Fuski, Astronaut, remixes for Destroid, Zomboy, Virtual Riot, Eptic, 501 and more under their belt, few can deny that Barely Alive are one of the most exciting and fastest grow-ing bass music acts to emerge over the last 18 months. The duo from Massachusetts, USA initially made a name for themselves when they released their debut ‘Lost In The Internet’ EP through Disciple Recordings in late February 2014 to global acclaim, hitting the number one spot across four different genre charts on Beatport in just 24 hours, causing them to become an over night success. The touring soon followed with the guys also gaining regular DJ support from the likes of Skrillex, Datsik, Excision, Zomboy, Skism and Downlink (to name a few!) as well as making regular appearances on huge online music platforms such as UKF, EDM.com, Your EDM, This Song Is Sick and most recently a guest mix for the infamous BBC Radio 1. 18 months since the first release, Barely Alive are about to unleash their debut album titled ‘We Are Barely Alive’ onto the world through Disciple and have fully established themselves as a headline act.