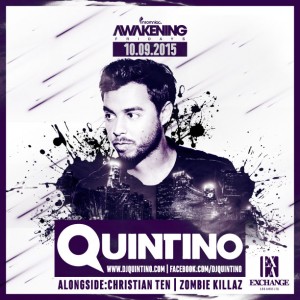 Quintino – Quintino is on the rise. Known as a highly talented Dutch DJ and producer, he is quickly becoming one of the leading forces in the global music scene today. After taking on the role as DJ it wouldn’t take long before he was able to place his mark on nowadays dance music. Working with legendary names as Tiësto and Afrojack, signed to the world’s largest record label Spinnin’ Records, this is a DJ whose career gets boosted year by year. At a young age, Quintino (born in 1985 into a musical family as Quinten van den Berg) begins exploring different musical styles and artists before deciding to start a career behind the decks. As he finishes school, he realizes his strong passion for DJing and begins picking up gigs at additional venues. And then, at 18, Quintino is discovered by house music mastermind Laidback Luke. The DJ is so impressed with Quintino’s precision and unrivaled ability behind the turntables that he decides to mentor the emerging
artist.