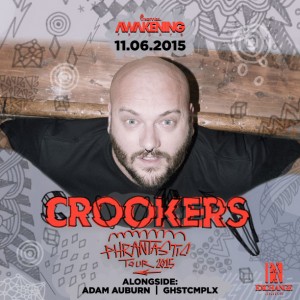 Crookers – Known for his earth-shaking live performances and cutting-edge albums, Francesco “Phra” Barbaglia has quickly become one of the most prominent djs working today. As the founding member of Crookers, he has shown the ability to not only create massive club hits but also a desire to push the genre forward through fearless innovation and a tireless work ethic. With numerous remix credits for artists ranging from the Chemical Bros to Kid Cudi, a recent, highly acclaimed live set at EDC and a new album in the works, Phra has shown no signs of slowing down. Born in the quiet town of Omegna, Italy, Phra seemed destined to follow in the footsteps of his dentist-father until a family cruise at age 11 exposed him to the world of dj’ing. From that moment on, he was hooked. Initially focusing his attention on hip-hop, Phra began experimenting with his craft while working at a local club just minutes from his parents’ home. It was here that he began honing his sound, blending elements of house, bossa nova, jazz and funk together into mixes that were unlike anything else at the time.