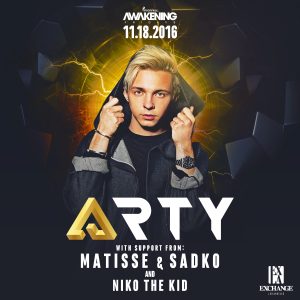 Arty – Arty is a Russian musician and DJ who succeeded in less than a year to make tremendous strides on the international dance scene. His music is supported by top musicians and DJs around the world, including Armin van Buuren, Paul van Dyk, Tiesto, Ferry Corsten, Above & Beyond and ATB. In 2009, Arty released his first production at the age of 19. His EP Vanilla Sky appeared on the label Enhanced Progressive and brought him to the attention of several DJs. His single “Bliss” appeared on tracklisting of A State of Trance with Armin van Buuren in early 2010. And his breakthrough came later that year when Above & Beyond signed him on their label Anjunabeats. They featured his singles Rush and The Wonder in their club sets and on their radio show Trance Around the World.