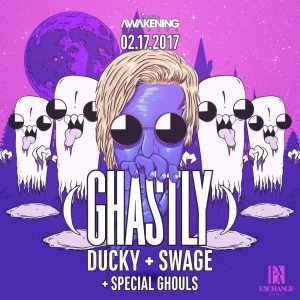 Ghastly – Entirely self-taught, David Crow’s musical style has progressed from a large variety of genres including Ambient, Death Metal, Experimental, all the way to his current EDM based creations. Music was always important in his life, but electronic production merged with David’s brain at the age of 16 when he was creating music through a beat workstation on a keyboard and re-wiring it into microphone inputs and editing it later through a free recording program called Audacity.

After leaving his family’s goat farm in Buckeye Arizona to live out of his van on Venice Beach California in 2010, he started at the very bottom, and has been quickly been working his way up to the top. From writing music off of a battery converter and a laptop in restaurant parking lots, to currently working as a full-time studio engineer having released under OWSLA and been rated #1 by LA Weekly, David had established a name to be known, and that name is ‘Ghastly!’